Trixi Trena - The Most Interesting JRT in the World

Trixi Trena has been nominated for Region 5 MVP.  So what better way to start the campaign than use our blog to get the word out?

She's valuable not only in flyball but also in helping around the house.


Trixi also is skilled in social networking.  She even set up her very own facebook page.

No Soup For You

Well, sadly Duu-wain has wised up to the sleeping blog posts.  It's like the Soup Nazi on Seinfeld.  Except instead of soup it's sleep.  Duu-wain's started wearing his hoodie over his head so NO SLEEP FOR YOU.

Looks like Xero tends to agree with her dad on the topic too. 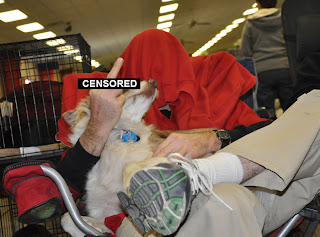 That's okay though . . . there's always some other unsuspecting sleeping dude in the DR! crating area. 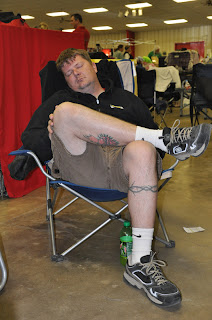 If we run out of our own club members, we may have to bring back Mr. Bill.  He's not afraid of venturing into unfamiliar territory  . . .  No club is safe when Mr. Bill's around.  Mu-wahahahahaha.
Posted by Lauren at 6:59 PM 2 comments

That's what Kim said to us when we were recapping the March tournament on our Dogz Rule! yahoogroup.  She had to miss the tournament to help run her agility club's trial (she's been trial chair for quite some time).

While she was there, she ran some agility with Pogo, Trixi and Stella. The highlight was Pogo.  While he likes flyball well enough (he'll run for cheese), he sure LUVS agility.  And he kicks some a#@ at it.

Here is a link to video of Kim and Pogo completing their NATCH-6 run (that's NATCH 6 times over!).  I tried to embed the video on the blog post, but alas, Facebook does not seem to allow this.  Darn you FB!

Pogo is one of the few dogs in the USA and Canada that have achieved this title.  Not bad for a 10 year guy!

Oh and even though Kim was not at the March flyball tournament in person, she was supporting her flyball team in spirit.  In the video you can see her wearing her DOGZ RULE! hoodie.

You rock Kim.  And so does Pogo.  Big congrats from your flyball family!
Posted by Lauren at 5:17 PM 5 comments

"Goals are Dreams with Deadlines"

The title of this post is fitting.  It's a quote by Diana Scharf Hunt.  (Google never ceases to amaze me.  I found the perfect quote and since I had no idea who the person was . . . I googled her too).

Almost exactly 1 year ago, DR! set a club goal.  This ever important goal we were striving for did not include breaking into the 16s (we did),  taking a couple of teams to CanAm (yep, we did) or even take 1st in Division 1 at the December tournament (heck yeah - we did), but it was to take a picture of Duwain sleeping at every tournament we went to this past year.

Guess what?  We did that too.

More Flyball than You Can Shake a Stick At!